The Aquarium was designed around a 6.3 million US gallon (24,000 m3) whale shark exhibit,[8] making it the only institution outside of Asia that houses the giant species. 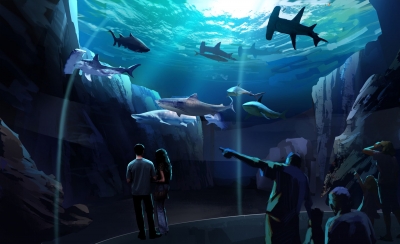 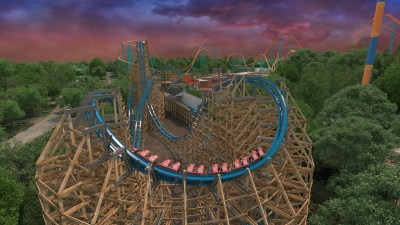 Six Flags Over Georgia is a 290-acre (120 ha) theme park located west of Atlanta in unincorporated Cobb County, Georgia, United States. Featuring characters and themes from a variety of Warner Bros. properties such as Looney Tunes and DC Comics, the park opened to the public in 1967 as the second of three theme parks built by Six Flags. It features 11 roller coasters, including top-ranked Mind Bender and Goliath that have been recognized annually by Amusement Today, and over 30 other rides, shows, and attractions. Hurricane Harbor, a 7-acre (2.8 ha) water park included in the price of admission to the amusement park, was added in 2014.

Six Flags Over Georgia, like most amusement parks, prides itself on its roller-coaster collection. Goliath and Mind Bender routinely rank among the top steel roller coasters listed by Amusement Today magazine in its Golden Ticket Awards. The collection expanded in 2011 with the addition of Dare Devil Dive, a Euro-Fighter roller coaster from German designer Gerstlauer.

The King Birth Home is located at 501 Auburn Avenue in the Sweet Auburn historic district. Built-in 1895, it sits about a block east of Ebenezer Baptist Church.[9] King's maternal grandparents, Reverend Adam Daniel (A.D.) Williams, who was pastor of the Ebenezer Baptist Church, and his wife, Jennie Williams, bought the house for $3,500 in 1909. In 1926, when King's father married Alberta Williams, the couple moved into the house, where King Jr. was born in 1929. 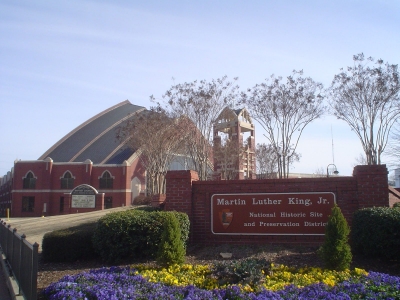 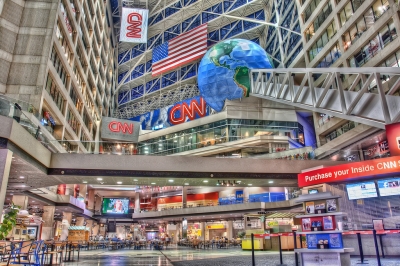 The CNN Center in Atlanta, Georgia, is the world headquarters of CNN (Cable News Network). The main newsrooms and studios for several of CNN's news channels are located in the building. The facility's commercial office space is occupied by various units of the former Turner Broadcasting System, now part of the AT&T subsidiary WarnerMedia. The CNN Center is located in downtown Atlanta adjacent to Centennial Olympic Park.

The building now occupied by the CNN Center opened in 1976 as the Omni Complex, a development by Cousins Properties. The Omni Coliseum, an NBA and NHL arena directly connected to the Omni Complex, had opened three years earlier, on October 14, 1972. The Omni Complex office building was largely vacant until CNN moved its headquarters there in 1987 from its Midtown Atlanta site (old home of the Progressive Club on 1050 Techwood Drive and home to Turner Broadcasting System)

Mercedes-Benz Stadium is a multi-purpose stadium located in Atlanta, Georgia, United States. Opened in August 2017 as a replacement for the Georgia Dome, it serves as the home stadium of the Atlanta Falcons of the National Football League (NFL) and Atlanta United FC of Major League Soccer (MLS). The stadium is owned by the state government of Georgia through the Georgia World Congress Center Authority and operated by AMB Group, the parent organization of the Falcons and Atlanta United. In June 2016, the total cost of its construction was estimated at US $1.6 billion. 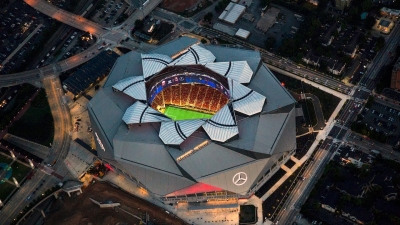 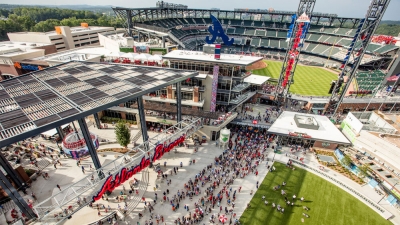 Truist Park (originally SunTrust Park) is a baseball park located in the Atlanta metropolitan area, approximately 10 miles (16 km) northwest of downtown Atlanta in the unincorporated community of Cumberland, in Cobb County, Georgia. It has been the home ballpark for the Atlanta Braves of Major League Baseball (MLB) since 2017.

The Braves hosted a soft opening for season ticket holders on March 31, 2017, in a preseason game against the New York Yankees.The first regular season game at the park was held on April 14, 2017, against the San Diego Padres

Luxury Atlanta Property is a vacation dream, Wedding Mansion, Luxury Rental Home, Mansion Ellenwood, Estate in Ellenwood Georgia to enjoy the latest movies in the home theater with plush theater seating or the cafe w/bar and billiards. Estate in Atlanta is perfect for private affair or next getaway
Book Now